MMSA staff presented the 2020 awards from the Old Capitol Inn in downtown Jackson via Facebook Live. The annual awards honors Main Street directors, board members and volunteers and recognizes the most outstanding downtown development projects from Main Street communities in Mississippi.

“Mississippi Main Street is excited to celebrate the achievements of our Main Street communities,” said Steven Dick, MMSA Board President. “Our local leaders have worked tirelessly to provide economic opportunities, increase quality of life, and preserve what makes our downtowns special.”

Starkville was awarded two Mississippi Main Street Awards both in the category of economic vitality. Orientation Dine Around received the Outstanding Economic Impact Award, and The IDEA Shop was awarded Outstanding Entrepreneurial Endeavor. 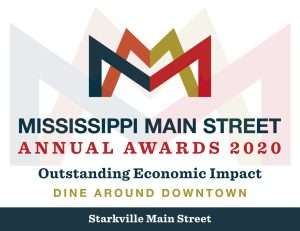 Through a dynamic effort to capitalize off the influx of future Bulldogs during summer Orientation at Mississippi State University, the Starkville Convention and Visitors Bureau and Starkville Main Street Association, along with Orientation and Events of the MSU Office of Admissions & Scholarships, developed and implemented the Dine Around Downtown, introducing thousands of incoming freshmen and transfer students and their families to dine in local restaurants in the Starkville community.

This event saw a 40 percent increase in the two percent food and beverage tax with over $45,000 going back into the local restaurants. Sales tax also increased during this new event. The Orientation Dine Around Downtown provides the first taste of culinary experiences in Starkville and has proved to be very successful.

The IDEA Shop opened its doors in downtown Starkville in March of 2019 and was made possible through private support and the USDA Rural Business Development Program. The Turner A. Wingo Maker Studio provides a comprehensive assortment of design workstations, 3-D printers, electronics, workbenches and advanced woodworking tools not commonly available – all to help people build anything imaginable.

Makerspace membership is available to the general public, and various workshops are regularly hosted for newcomers to the “maker movement.” In addition to holding regular events, participating in all of the many Main Street activities and programming, the IDEA Shop also recently joined in to design uniformed sidewalk signs for chamber businesses. The IDEA Shop, located in the heart of Downtown Starkville, is a shining example of an innovative business that exists to create an everlasting entrepreneurial spirit in Mississippi’s College Town.