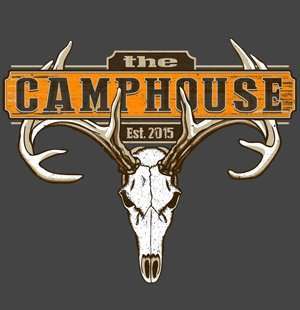 For much of my life I have heard friends talk about going to “the camphouse.”  There is good bit  of meaning tied up in that compound word.  It might be a base of operations for hunting, where “what happens in the camphouse stays in the camphouse”.  It might be a second home, a place to escape the busy-ness of weekday life.  Or it might literally be a place for folks who like to get back to nature, but prefer nature inside four solid walls over nature in a tent.  We never really had a camphouse to go to in my family but I think I’ve finally found one, and it comes with two chefs. The CampHouse Restaurant has been open in Starkville for just over a year now.  And every time I’ve gone in there I have left thinking, “Those guys are having fun.”  Seriously, how could “Make Your Own Mac-n-Cheese” not be fun?  Chefs Everette Hill and Jordan Hartley, along with proprietor John Peeples, truly enjoy playing with their food – and diners at the CampHouse are the beneficiaries.
Though “fun” is a key ingredient in CampHouse recipes, they are also very serious about doing things the right way.  For them that means taking the time to make many of their menu items from scratch.  They build their own seasoning blends.  They brine and bake their own corned beef.  They smoke a wide variety of foods: tuna, salmon, pork – even cheese. They grind their own meat for burgers.  The queso, pico de gallo, and salsa are theirs.  That’s just the list we could come up with on my visit this week, but I know there is much, much more.

So far in my journey through Starkville Restaurant Week I have had some help: The Wife was with me, or Daughter, or Son and his posse.  This day they were all busy with trivial things like work and school.  So I went to the bullpen and called The Wingman to assist.  Here’s the story of our trip to The CampHouse.

We began with the Chef’s Salad of the Week, also known as the J-Hon salad.  It was plated much like a traditional Cobb salad, each element occupying its own section of the plate: broccoli, tomatoes, mushrooms, roasted red pepper, and artichoke hearts, with a sprinkling of feta cheese and a centerpiece of cold-smoked salmon.  The dressing was a red wine vinaigrette that I’ll bet was house made, too.  This salmon – cured, seasoned and smoked in house – is a perennial favorite that combines well with all sorts of seasonal fruits and vegetables.  In fact, just last week someone I hadn’t seen in months was at my house; one of the first things he did was show me a picture of a salad from The CampHouse with grilled watermelon and the salmon.  I kid you not. As I mentioned earlier, they grind their own burger meat there – a mix of top round, ribeye fat and bacon.  (Hope that wasn’t a secret…) The Wingman was able to detect the bacon in the mix; I was impressed.  But instead of a traditional burger, we had a patty melt: a ground beef patty, melted American cheese, garlic aioli, and caramelized onions on marbled rye bread, plus a side of seasoned fries.  The Wingman noticed almost immediately that they were double-fried, a technique that produces consistent crispiness in a dish that demands it.  With crispy fries seasoned just right, and a gooey, cheesy patty melt, we were in the heartland of comfort food.  But it was about to get even more comfortable. Perhaps the signature dish of The CampHouse is the Make-Your-Own Mac-n-Cheese.  This is how it works.  You have three pastas to choose from: cavatappi, bowtie or penne.  Next you pick a cheese: cheddar, gouda, parmesan, pepper jack, smoked cheddar or goat.  Then comes the meat: bacon, ham, grilled chicken, sausage, beef, crawfish, crab or shrimp.  That would be enough for most folks, but now you can choose from at least eight different vegetables, and if you want it spicy they can do that, too.  Chef Everette said someone could come in daily for six months and not have to order the same combination twice.  I was a bit skeptical at first, but I did the math at home, and I’m pretty sure an avid mac-n-cheese addict could go much longer.

If you have trouble making decisions, or just prefer to let the chefs make the call, there is a Mac-n-Cheese of the week, which is what came to our table.  Ours had cavatappi pasta, gouda, smoked cheddar, onion, bell pepper, pulled pork and barbecue sauce.  It certainly had some rich elements, but the onions, bell pepper, and the vinegar in the BBQ sauce cut through the  dynamic cheese duo quite nicely. By this time I was ready for some dessert.  Not just because I love sweets – though I do, and lately even more so it seems. Rather, it was because I had already glanced at that part of the menu, and I was particularly curious about the S’mores in a Jar.  What they brought out instead was even better: a S’mores Cheesecake Parfait, in a wine glass, no less. It was the ultimate camp food delivered in an elegant vessel.  One technique that L.J. revealed was the addition of marshmallow cream to the cheesecake filling – it was designed to serve as the marshmallow portion of the S’more, and I thought it made all the difference.  In a very real way, this one dessert reflects the philosophy of The CampHouse: “Top shelf food and flip-flop friendly.” There are others, too, that have made their way onto the specials board: John’s famous bread pudding, a caramel apple cake, and a coffee cake with Gotta Get Up to Get Down sauce. I asked John why he decided to call his restaurant what he did.   He said, “The camphouse is where friends gather, make up food (“try a little bit of this”), and cook great food.  We’re a local place for local folks.” Local folks have even helped with the decor, by sending in pictures of their own camphouses that are now on display.  (And he would like more.) I once walked in while John was eating dinner at the bar; while we waited for a table to be cleared, he offered me a bite of what was on his plate, something new they were trying out.  I should enter a disclaimer here: John and I go way back – all the way back to Cub Scouts.  I’m not encouraging anyone to walk around a restaurant and graze from the plates of random strangers: “Hey, you gonna’ finish that?”  But it certainly goes to show the relaxed atmosphere of The CampHouse, where they “want to take care of people who know what they want for supper.”  They even take care of indecisive people like me.  Grab your flip-flops and let them take care of you.