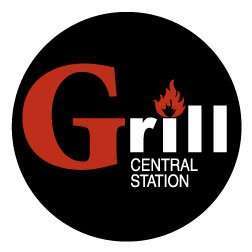 I have a long history with Central Station Grill, even before it existed as a destination restaurant in Starkville.  The historic building it occupies is the former home of Eagle Brand Sweetened Condensed Milk.  (I love that stuff.  Does anyone else just like to eat it out of the can?)  As a teenager trying to get home from my girlfriend’s house before curfew, I would approach the tracks that run alongside the building, praying the train would not be passing by.  (You win some, you lose some.)  Also, the Grill was the subject of my first published restaurant review about four years ago.

Since then I have spent a good bit of time with the fine folks from the Grill at the Taste of Starkville, Forks and Corks, and the Souperbowl; they generally come in with some incredibly creative food, and go out with medals and trophies.  So when it came time to make this visit, I was really just going to visit old friends.

As it happened all week long, this is the conversation that preceded our meal.  Chef: “What would you like to eat?”  Me: “Bring out whatever you want me to eat.”  I really should do that more often – it has certainly worked out very well so far.

Shortly after we were seated our server Justin brought out a plate of fried okra, upscaled with house-made chipotle ranch sauce.  I think Chef Leon Jefferson (aka Chefferson) must have been trying to get on The Wife’s good side.  Even with her Yankee tendencies, she can put away some fried okra.  I was fascinated by the process he goes through to make it: a dip in flour, a dip in buttermilk, a dip in cornmeal, then some quality time in the cooler.  When it’s time to fry it, it gets one more dip in buttermilk, then a final dredge through sifted flour and cornmeal.  Using this method, nary a piece of okra escapes prematurely from it’s extra crunchy, double-battered coating.

Before we had time to put a good dent into the okra, Justin came along with Crawfish Caprese Salads.  I was really happy to see this coming – Caprese salad is one of my favorites.  Traditionally, Caprese is made up of tomatoes, basil and fresh mozzarella – all the colors of the Italian flag.  Chefferson’s take did have tomatoes, but the basil was replaced with arugula (my favorite green – good move) and blue cheese crumbles subbed for the mozzarella.  But he also added sauteed crawfish tails and a little balsamic vinaigrette.  Oh, and there was bacon.  Can’t forget the bacon for a little salty touch.  Check, please!  The Wife and I agreed – we could have been very happy with that as our meal, but for the sake of Starkville Restaurant Week, we let the dishes keep on coming. In the spirit of the season, they brought out a Springtime Shrimp Primavera Farfalle – that’s bowtie noodles for those who didn’t choose Pasta for your college language requirement.  The farfalle was tossed in a light mornay sauce mixed with a five-veggie blend, and garnished with a sprig of basil.  In my younger, more ignorant days, I took garnishes and put them on the side of the plate.  This time I took a bite of the basil with my pasta, which gave it even more of a fresh, springtime flavor. Our second entree was a bit familiar to us.  Chef Leon won an award at Forks and Corks one year with his pesto-crusted catfish and it is now on the regular Grill menu.  And The Wife, who has been known to turn her nose north towards home when offered catfish said, “I have never enjoyed catfish this much”.  Nowadays he lets it rest on a bed of rice, and tops it with roasted red pepper remoulade.  I was most taken by the side dish of stir-fried broccoli, mushrooms, and crumbled Andouille sausage.  Those are all foods I like, but they took on a new life in this mix.

By the way, both main dishes came with the Grill’s new dinner bread, a rosemary focaccia with honey butter.  Sweet, savory, and herby all in one bite.

Our desserts were as tall as they were rich.  This shouldn’t have surprised me.  The first time I tackled a dessert there it was a giant hunk of Snickers Bar Pie, which is still on the menu and probably should be shared – but I was eating alone that day and didn’t want to be rude, of course.  For the sake of good manners, I cleaned my plate.

Back to present day, we started with a towering piece of New York Style Cheesecake with a bourbon caramel glaze and lots of pecans.  I’ve eaten cheesecake a lot of different ways, and to me the caramel enhanced the rich flavor in the cheesecake.  Oh, and it was made even taller by two full sticks of cinnamon as a garnish.  (Unless you are doing some sort of internet cinnamon challenge, I recommend laying these to the side.)  The height of the salted caramel pie came from the extra-large wonton wrap planted in the pie like a flag, deep fried and dusted with cinnamon and sugar.  The pie actually had caramel two ways: a thick base of salted caramel under the apples, and a drizzle of caramel sauce on the plate.  And to mellow things out a little, a dollop of Irish vanilla cream mousse. I asked Chef Leon what he really liked to cook.  He said his favorite by far was seafood, scallops in particular.  This didn’t really surprise me.  He has won prizes in culinary competitions with scallops as the featured ingredient, and the seafood at the Grill is flown in daily from Hawaii and the Florida coast.  Here is my theory: when you put fresh Hawaiian fish in the skilled hands of someone who loves to work with it, you can bet he’s going to put his heart into every aspect of the dish.

Since this is the last post for Starkville Restaurant Week, I want to thank all the chefs, servers, managers and owners who have taken such good care of us.  I am afraid to get back on the scale, I am definitely going to have to take up running again, and I see many plain salads in my immediate future, but it was all worth it!